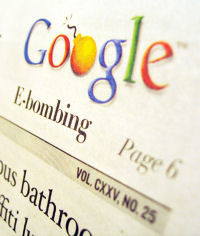 Googlebombs are attempts to influence the Google rankings of a page for humorous or political intent. (See a fuller description on Wikipedia.)

A famous example is when a search for the phrase “miserable failure” brought up the official White House biography of then-President George W. Bush as the first result. That’s because so many people had created links on their web pages that pointed to the President’s biography with link text that said “miserable failure”. Since the technique doesn’t only work on Google, the more generic term for it is a “linkbomb”. David Letterman might call it a “stupid SEO trick”.

Now, it seems that Google is trying to spoil the fun for those pranksters. They’ve modified their algorithm to detect and disregard such Goglebombs. You can read a good overview of this, including lots of blog responses on the Google Operating System blog.

[Update: a related issue is website’s with an Exact Match Domain where the domain matches a critical keyword for the website. For example SpringfieldNailSalon.com or MadisonPlumber.com.  Such websites could get higher rankings for those keyword searches than they really deserved just because of their domain name. Google corrected for Exact Domain Names in 2013.]
Subscribe
Login
0 Comments
Inline Feedbacks
View all comments